Musical performance and its problems 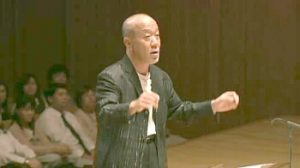 Performance as a special kind of artistic activity does not exist in all arts. In painting,
for example, it is inseparable from creativity: to create a picture is what it means to “fulfill” it. Once, in music, the creation and performance of a piece were not separated from each other: in ancient times, a musician sang or played what he himself composed and improvised.
But the creation of a painter or sculptor is embodied in the material that preserves it for centuries, and the material of music (sound) lives while it sounds. Sounding out, the musical work ceases to exist, disappears. To hear it again, it must be revived every time, made to sound again. The ability to do this is what is called the art of performing music. It is clear now why the performance (as a special
art specialty) does not exist in all arts. Works of art, such as – painting, sculpture, architectural structure, – do not need, if they were not spoiled in any re-creation. Only in those arts that take place in time does the need arise for special intermediaries between the work and its listeners or viewers, intermediaries – actors, dancers, readers, musicians who are able to repeatedly reproduce these processes imprinted in transient sounds or movements.
But why are any special performers needed for this? Wouldn’t it be better if the one who created it, the author himself, will be involved in the performance of a musical work? That the author himself can act as a performer of musical works is no doubt, just as the fact that such an “authorized” performance is of particular interest and value. In the old days, combining the specialties of the composer and performer was even the rule: as early as the eighteenth century, almost all the major musicians — Bach, Handel, Kuperin, Rameau, Scarlatti, Mozart, and others — showed themselves with equal brilliance in both these fields. Later this combination occurs gradually less and less. The rule is the separation of these professions, the separate existence of “pure” composers who do not perform in concerts, and “pure” performers who deal exclusively (or almost exclusively) with public interpretation of other people’s works. What explains such a turn of events? Why did professional performance get such a development, pushing aside the author’s performance to the background?
First of all, because the public performance of musical works requires a special vocation for artistic activity, specific natural data, time and effort for daily long-term training, etc. The composer may or may not have one or the other. Meanwhile, without the artistic “nerve” and temperament or without endurance and composure on the stage, without a voice with or without a motor (motor) dexterity when playing any musical instrument, without elaborated and constantly supported equipment and much more from the same field the performance is doomed to failure: it does not “bring” the work to the audience, only unfairly discredits it in their eyes. But even in the case when it comes to a composer endowed with the necessary performance data, to limit the interpretation of his works to the author’s performance alone would extremely weaken their social resonance and narrow down their influence to the extreme. How many times during life – more precisely, during his concert activity – will some composer-pianist have time to play publicly each of his works, how many people will hear him? And how these numbers grow immeasurably when hundreds, thousands of pianists take up the cause instead of one! And how to get out of the situation, if the author due to illness or old age can no longer speak publicly? Finally, what would be the fate of the work after the composer’s death? Beethoven died in 1827 – so, since then it would have been impossible to hear “Appassionatu” anymore? To the above considerations should be added another. Let the composer brilliantly own the piano, or the violin, or some other instrument. But what about works written for singing or for other instruments that the author does not own (he cannot masterly master everyone)? How to deal with works intended for simultaneous performance by several, and even many performers – for example, a string quartet, choir, orchestra? Could Verdi, say, if he were even seven spans in his forehead as a singer or violinist, sing and play at the same time all the vocals and orchestral parts of Aida, La Traviata, or any other opera of his own? Thus, we see that only the author’s performance, with all his valuable qualities, is not able to provide the work with either a fairly wide audience or a long sound life. Both are unattainable without a large and constantly replenished army of professional performers, without developed performing arts.