5 TOURS CHANGING THE HISTORY OF MUSIC 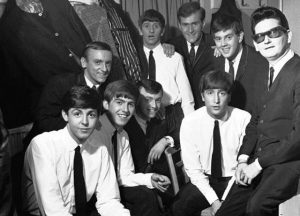 Infinite traveling around the world and daily concerts every time in new places: a significant part of the life of popular musicians goes on touring tours. But sometimes it happens that a tour becomes fateful for its members or even for the whole history of music. Below are five stories about such tours.
The fifties who introduced the world to rock and roll left a legacy in the form of many talented musicians. Among them was the American Roy Orbison, who in 1963 decided to go to the UK. At the same time, in the Foggy Albion, the group The Beatles was gaining popularity, whose young members were big fans of Orbison. For their good fortune, they were given to accompany the singer on his first tour to the other end of the world.
Orbison himself hardly knew who the Beatles were, but already then the British music lovers knew them well. At his concerts began to come in order to hear the local group, a phenomenon began to emerge, which was later called Beatlemania. A competition appeared between the musicians, but this competition was friendly in nature, and the desire to surpass the famous musician subsequently resulted in the Beatles’ best songs.
The outcome of this tour was the friendly relations of The Beatles with Roy Orbison and the increased popularity of the young group, which, a few months later, was again able to go on tour: this time it was an independent one.
The notorious punks of the seventies of the Sex Pistols in 1976 went on tour in the same UK. The name of the tour directly reflected the anarchist political views of the group, which she did not hesitate to express in the lyrics of her songs. Of course, the British government didn’t like it at all.
Already the first concert of the tour in Norwich was canceled “on the basis of protecting security and protecting the population and property.” State-run media quickly picked up panic and began demanding the cancellation of the entire tour. Upon learning of this, fans of the group began to organize protests, but they did not bring the desired result: the Sex Pistols concerts in different cities were canceled one by one. As a result, of the twenty planned concerts, only seven were held.
However, it was not the number of concerts that made this tour famous: the more condemnations and prohibitions were caused by punk rock, the more it went to the masses, increasing the number of supporters and followers. As a result, the Sex Pistols are still spoken of as one of the most influential alternative groups in the United Kingdom.
Sometimes it happens that a tour serves as an impetus for a group to write new material. That is what happened to Pink Floyd during the world tour in support of the album “Animals”. At that time, Pink Floyd had already reached the popularity that could cause inadequate behavior among the audience, and the group was not ready for that.
During the final tour of the concert in Montreal
Those gathered led as if they didn’t want to listen to Pink Floyd at all: they burned firecrackers, shouted and generally banned the group from performing songs. At some point, Roger Waters got angry and spat in the face of one of the most “noisy” fans. Already after the concert, Waters reflected on this act, as well as on his own disillusionment with the popularity and status of a rock star.
It was from these reflections that the conceptual album “The Wall” appeared later. The wall has become a symbol of the barrier between the artist and the audience in the narrow sense and between man and the outside world – in the global.
Pink Floyd were not the only ones who wrote their most famous album, inspired by the tour. The same happened with the Irish U2, who after the tour of America released “The Joshua Tree”, scattered around the world 25 million sales.
“Conspiracy of Hope” was not the first U2 visit to the United States, nor was it the longest: it included only six dates. Its peculiarity consisted in the charitable goal, which was supported by Amnesty International, namely, drawing attention to human rights issues and the issue of prisoners on political, religious and scientific grounds.
As a result, the U2 charity tour of America was so impressed that they made the States the main theme in the next year’s The Joshua Tree, which is still on the list of best-selling albums. And the tour marked the beginning of a whole series of charity concerts of this organization, in which later such groups as Radiohead and The Police took part.