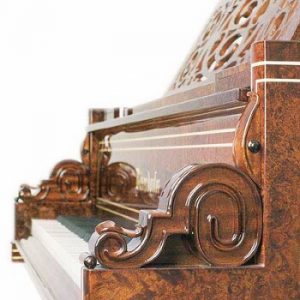 Impressionism originated in France when a group of artists — C. Monet, C. Pissarro, A. Sis-ley, E. Degas, O. Renoir, and others — performed their original paintings at Paris exhibitions of the 1970s. Their art was very different from the smoothed and faceless works of the then painters and academics: the Impressionists left the workshops to the open air, learned to reproduce the play of the living colors of nature, the sparkle of sunlight, colorful highlights on the moving river surface, the diversity of the festive crowd. Painters used a special technique of fluent spots and brushstrokes, which seemed disorderly near, and at a distance gave rise to a real feeling of a lively play of colors, bizarre modulations of light. The freshness of an instant impression was combined in their canvases with the subtlety and refinement of psychological moods.
Later, in the 80-90s, the ideas of impressionism and, in part, its creative techniques were also expressed in French music. Two composers – C. Debussy and M. Ravel – most clearly represent the flow of impressionism in music. In their piano and orchestral plays, sketches with a special harmonic and modal novelty, the sensations caused by the contemplation of nature are expressed. The noise of the sea surf, the splashing of the stream, the rustling of the forest, the morning chirping of the birds merge in their works with the deeply personal experiences of the musician-poet who is in love with the beauty of the surrounding world. Both of them loved folk music – French, Spanish, Oriental, admiring its unique colorfulness.
The main thing in musical impressionism is the transfer of moods, acquiring the meaning of symbols, subtle psychological nuances, and a poetic landscape programming. Refined fiction, poetization of antiquity, exotics, and interest in timbre and harmonic brilliance are also characteristic of him. With the main line of impressionism in painting it has in common an enthusiastic attitude to life; moments of acute conflict, social contradictions in it cost.
The classic expression “musical impressionism” found in the work of C. Debussy; his features also appeared in the music of M. Ravel, P. Duke, F. Schmitt, J. J. Roger-Ducas and other French composers.
Debussy is considered to be the pioneer of musical impressionism, which has enriched all aspects of contemporary composing skills – melody, harmony, orchestration, form. His innovative experiments are partly inspired by the outstanding discoveries of Russian realist composers, primarily M. P. Mussorgsky. At the same time, he embraced the ideas of new French painting and symbolist poetry. Debussy has written many piano and vocal miniatures, several pieces for chamber ensembles, three ballets, a lyric opera “Pelleas and Meli-zanda”.
Musical impressionism inherited many features of the art of late romanticism and national music schools of the XIX century. (“The Mighty Handful”, F. Liszt, E. Grieg, and others.). At the same time, the Impressionists contrasted the art of restrained emotions and transparent, stingy texture, fluent changeability of images to the clear relief of the contours, the exquisite materiality and oversaturation of the musical palette of the late romantics.
The work of impressionist composers has in many ways enriched the expressive means of music, especially the sphere of harmony, which has reached great beauty and sophistication; the complication of chord complexes is combined in it with the simplification and archaization of modal thinking; in the orchestration, pure colors, capricious glares, cradles and elusive rhythms prevail. The brilliance of the harmonic and timbre means is highlighted: the expressive meaning of each sound and chord is enhanced, and previously unknown possibilities of expanding the modal sphere are revealed. The special freshness of the Impressionist music was given by their frequent appeal to song and dance genres, to elements of the musical language of the peoples of the East, Spain, and early forms of Negro jazz.
Spiritual pictures of nature with surprising, almost visible concreteness are transmitted in his orchestral plays: “Preludes to the Afternoon of the Faun” ”, in the cycle“ Nocturnes ”(“ Clouds ”,“ Celebrations ”and“ Sirens ”), three sketches“ Sea ”, a cycle “Iberia” (three sketches of nature and life in southern Spain), as well as in the piano miniatures “Island of Joy”, “Moonlight”, “Gardens in the Rain”, etc. In the work of Maurice Ravel (1875-1937) reflected the later era. The drawing of his writings is sharper, sharper, the colors are clearer and more contrasting – from tragic pathos to ulcers irony. But in his compositional style there is also subtle sound writing, a complex and variegated play of colors, typical of musical impressionism. In the best piano pieces of Ravel the whimsical iridescence of sounds inspired by living nature prevails (“Play of Water”, “Sad Birds” A boat in the middle of the ocean “). Throughout his life, the composer developed the motifs of his beloved Spain. This is how the Spanish Rhapsody for Orchestra, the Spanish Hour and Bolero comic appeared.
Ravel paid much attention to dance music genres. Among several of his ballets, the ballet-tale “Daphnis and Chloe” stands out.