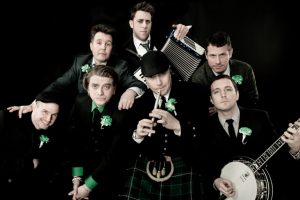 The emergence of folk punk was preceded by a wave of popularization of folk rock, as such. If there was an opportunity to return 60 years ago and find ourselves in the States, we would be able to catch the flourishing of this genre. Folk-rock combines elements of rock and folk – in other words, folklore.
Folk-punk: history, features, groups of Dropkick Murphys
A new genre, rapidly gaining crazy popularity began, oddly enough, with a cover version of the song “Mr. Tambourine Man ”by Bob Dylan performed by The Byrds.
It is worth noting that folk music was used quite often at the time: for example, its influence was evident in the songs “Hide Your Love Away” and “I’m a Loser” by The Beatles. The features of the genre, by which you can recognize it, include pure vocals without using effects that change the sound, and the legendary ringing jingle sound of electric guitars, which was first used in The Searchers music and The Beatles recordings – in particular when George Harrison used Rickenbacker 12-String Guitar.
In America, the genre was developed in the work of the groups Crosby, Nash & Young, Buffalo Springfield and Stills. In England – Fairport Convention, Pentangle, Steeleye Span and Donovan. A symbiosis of ethnic, folk music and elements of rock was common in Europe and Scandinavia. He did not catch on only in Saudi Arabia, Asian countries due to cultural and political circumstances.
Folk-rock set the tone for the further development of musical culture, giving impetus to the emergence of many of its subgenres. So, two decades later, folk-punk bursts into the musical arena.
Folk punk
Now, folk motifs sounded in punk rock – in the music of apolitical teams, and in the work of groups with a pronounced civic stance. His appearance style is directly obliged to the Irish team The Pogues. Although the group is considered to be Irish, since it uses Celtic motifs, it was founded in London.
In 1982, the band gathered vocal guitarist Shane McGowan, of course, toothless and drunk forever, in selected cliches of punk culture. Shane himself assured everyone that he did not remember himself sober from the age of fourteen.
The group, as is typical of punk ideology, actively displayed its political position. So because of the influence of the authorities, the guys had to redo the video for the song “A Pair of Brown Eyes”, where they spat on the portrait of Margaret Thatcher.
Despite the general atmosphere of drunken stupor and brawl, the team not only made friends with punk rock and folk music, but also brought a new genre of folk punk to unprecedented heights. Three albums hit the top 10 charts in the UK, the second position was taken by the single “Fairytale of New York”, and a number of tracks climbed to the top of the charts in Ireland.
The most successful representatives of this style in the UK include the group Chumbawamba, the musicians Attila The Stockbroker and Billy Bragg.
The United States of America was not inferior – on their stage folk-punk presented the most commercially successful band Violent Femmes.
Folk-punk: history, features, groups Violent Femmes
The debut album of the team contained ten songs written by the founder of the band Gordon Gano back in high school. A miracle happened and, never once appearing on the Billboard charts, the album “Violent Femmes” eventually sold three million copies – it became platinum three times.
Other musical groups, such as The Dead Milkmen, Hüsker Dü, and Articles of Faith, also took interest in the folk sound. A little later, the new sound in the genre was introduced by the German team Across The Border.
By the beginning of the 90s, the boom of folk punk had passed and interest in it had declined. Success and further development he received already in his subgenres – Celtic-punk and gipsy-punk.
Celtic punk
It is not difficult to guess that this time punk rock has merged with Celtic folk motifs. A distinctive feature of the musical groups of this style is to use ethnic instruments along with the classic for rock stuff. So in Celtic-punk you can hear the sound of bagpipes, accordion of violins, fiddle, whistle, banjo or mandolin.
Despite the fact that the lyrics are based on Irish and Scottish folklore, and their themes are often the plight of the people, republicanism, independence and the life of these diasporas, politics does not prevail in the lyrics of this genre.
Dropkick murphys
The Boston Celtic Group, founded in 1996 by Mike McColgan, Ken Casey and Rick Barton.
The name of the team came from the name of the former football player who soon became a wrestler, John Murphy, nicknamed “Dropkick” (as in wrestling is called a kick in the jump). Although the composition of the team changed, one thing remained unchanged – they all honor the cultural traditions of the Irish people and annually perform at the festival in honor of St. Patrick in Boston.
Flogging molly
This is also an American group consisting of 7 people led by Irish Dave King.
The crew was assembled in the late 90s when King met guitarist Ted Hutt, bassist Jeff Peters and violinist Bridget Reagan. It was in this composition that the first songs of the group saw the light.