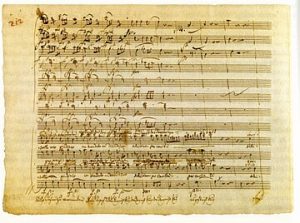 I don’t know how objective my subjective pessimism is, but the ghost of a certain decline has been stubbornly seeing me for the last few years. Atrophy of musical perception? Decadence? Satiety? Perhaps the last. I remember one of the laws of Murphy: “The amount of intelligence on the planet is a constant value, and the population is growing.” Paradoxical as it may seem, but perhaps from the general “internetization” of the music space, coupled with the growing availability of musical creation tools to the average man in the street, we have no less lost than won.
It is bad when the Artist has no canvas and paints, they will tell me. Even worse, when every mediocrity has brushes and an easel, I will object. According to one of the laws of biology, each population, which is an organic part of a universal ecosystem, has the ability to self-regulate, the acquisition of which has become vital for the population as a product of evolution. An artificial change in its numbers, both in the one and the other direction, causes negative consequences both in the population itself and in the balance in the general system.
Modern music, including electronic, and no less so-called experimental – personally reminds me more and more of an artificially inflated population, every year experiencing the ever more serious problem of maintaining itself in a viable state. Any economist will say that the problem of growth is first of all the problem of the availability of resources for it. And where to find that demiurge to gain on all musical ideas, when at every entrance nowadays he sits on Xenakis?
Replication Imitation. Grayness
Music as a product of consumption. Spiritual development as one of the indices of the consumer market.
Am I exaggerating? Maybe. But I do not think that I am much mistaken. I listen to my playlist and sometimes I hardly notice that one album has been replaced by another. And after all, I’m not talking about the frankly bred recently network trash, from which we try to protect our irreplaceable winamp. I’m talking about names that are somehow pretty and worthy. And yet, most often, the musical something habitually flows through the auditory channels, causing neither rejection nor special enthusiasm, sometimes something makes the perception start to arouse, but rarely is the spirit of something new and incredible, most often it is something well known. although emotionally bright. It turns out we are doomed only to return the familiar, provoking ourselves again and again to experience the same impressions?
Well, yes, if we assume that there are only seven notes. Or maybe the fact is that some too shamelessly exploit them?
Erosion of musical soils.
The availability of modern IT-tools for creating music, allowing each cook to create her own “Magic Flute” at home, allowed to form a queue of Heroes of the new time. Here they are, numerous Debussy and Schoenberg, rushing to the musical Olympus with scores under their arms. And here is Olympus with new musical Gods: Rapidshare, iFolder or SoulSeek, promising all mortals their untold musical riches. And everyone replicates everyone. Amen.
Replication has killed the spirit of anticipation, the spirit of impatience. Gone is the excitement of the search, many already know the happiness of owning. And who remembers how great it was by hook or by crook to look for something new, change and rewrite music from each other? How many simple but strong emotions did this bring?
Looking at the hordes of IDM adherents who have crammed net labels in their opuses and listening to certain “creations”, you cannot get rid of the unpleasant sensation of a parched throat. Give the same air! Give the broom the dust! But the worst is not that. Worse is another. System theory assumes that all components in it belong to the rest and to the system as a whole. And as a result, our perception is quietly undermined, becoming more and more infected with the strain of conformism. Why? Well, let it be, it does not interfere! This flower will germinate among the weeds. Does not interfere … Why only yesterday’s idols come back today without a gleam in their eyes, having long since not believed in themselves? Apparently their immunity is also not unlimited.
As a result, we are timidly asking each other about the latest Ae or Portishead. Timidly, because we are afraid to admit that we didn’t get close to those emotions that we once received. With enthusiastic enthusiasm, we grab Burial to fill the spiritual emptiness, which is increasingly annihilating the musical space. And only a few, like Murcof or Hans Appelqvist, are still able to genuinely touch a living thing.
Probably it’s just melancholy. Melancholy shadows jumping on the evening wall. And yet the feeling that the cup is full. And the problem is no longer what was poured into it. More importantly, nothing can be poured into it. It’s time to throw out the bowl.