Enhancer, exciter and tube amplifier – what is in common? 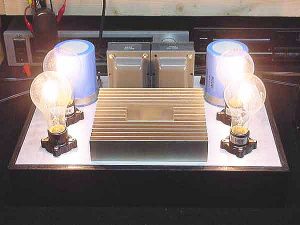 An exciter (also called Exciter), also called harmonic exciter, psychoacoustic processor, enhancer and acoustic aural exciter, is a processing device used to harmoniously synthesize high-frequency signals using thin harmonic distortion.
This harmonic synthesis is to create higher harmonics based on lower signal frequencies. Usually the noise is present in different frequency bands in unequal quantities, and the harmonics obtained from the pure frequency band will be clearer. Less commonly, exciters (enhancers) are used to synthesize low-frequency harmonics, in order to imitate deep bass.
Initially, exciters were made on the basis of tube amplifiers, but now they also exist in the form of digital processors.
Exciters and enhancers are used to change the tonal quality of the sound. But, unlike the equalizer, which simply amplifies or weakens the frequency present in the signal, enhancers can create new harmonics.
The equalizer does not add extra harmonics to the sound. It is used to amplify or attenuate the existing frequency. Equalizer is used to underline the characteristic overtones of musical instruments and enhances a certain frequency domain. In the case when the required frequencies are initially small, then equalization does not give the desired effect, or, together with a weak signal, will pull out all unwanted noise.
Fine processing by an exciter, with its proper application, gives a sense of transparency and increased sound intelligibility. Although the lack of understanding of the process of excitement can lead to rather pitiable results. For example, an exciter does not make sense to process an organ or brass instruments, which are characterized by a linear spectrum of the basic tones. Extracting a tool that, by its nature, does not have overtones, can cause a very unexpected and often unpleasant effect.
Unlike traditional equalizers, when using an exciter, the probability of adding noise and hissing, which make the sound less clear, is less, especially for tape recordings of analog tape, which have lost their “sparkling” due to frequent overlapping.
– Exciters are also used to restore old records, adding the lost spectral content.
– Exciters are sold in the form of pedal effects specifically designed for electric guitar, bass or electronic keyboards.
– Exciters are very often used for mastering.
In contrast to the equalizer, the exciter completes the higher harmonics himself, starting from the envelopes of the fundamental tones. That is, it is not the amplification of the required frequencies, but the logical addition of new overtones (harmonics).
Exciters, as a rule, create harmonics that are multiples of 2, (2, 4, 8 …), which, according to auditory sensations, gives clarity and greater intelligibility to sound, “volume” and “warmth”. With that, the overall volume remains the same. The difference from harmonizers, which, as a rule, create harmonics throughout the sound signal band, exciters make it possible to choose enrichment frequencies.
But exciters have the opposite negative property: with a long listening, the listener has a desire to constantly increase the saturation of the sound with harmonics, so after some time when listening to the sound without the exciter, the recording made with his participation may seem oversaturated with porridge.
Now let us turn our attention to lamp amplifiers, which so often are presented to us almost as the only devices capable of qualitatively amplifying sound vibrations and transmitting all the bulk, warmth and many other attributable properties.
Currently, tube amplifiers are subject to commerce and speculation precisely because in their nature of amplification of sound oscillations there is originally an excitement mechanism (but usually sellers don’t like to focus on this, because, thanks to this effect, it is possible to attract buyers of expensive equipment ).
As you know, the auditory perception of sound is a subjective thing. The human ear accurately identifies a harmonic-rich sound as closer or louder when compared with the same harmonic-free sound. For example, the sound of a guitar string or piano with a bang is much more enriched with harmonics compared to a soft acoustic performance, but still the listener will easily define a bounce as louder and closer, even if the amplitude of the second is slightly larger than the first. As is known, most tube amplifiers have a harmonic ratio of about 1%, which gives the effect of “approaching” (excluding) the background (you should make a reservation, this is the case for small intermodulation distortions, which is typical of tube amplifiers).
For this reason, it is necessary to revise the generally accepted views on the “phenomenal” quality, “detail” of the sound and the indispensability of tube amplifiers.