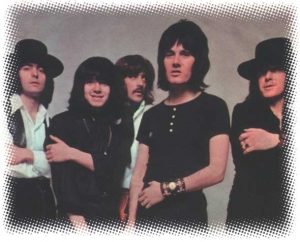 In March 1968, a group composed of Richie Blackmore – lead guitar, John Lord – organ, backing vocals, Rod Evans – vocals, Nikki Simper – bass, backing vocals, Ian Pace – drums. A new group at the suggestion of Richie decided to call “Deep Purple”. This title was taken from an old song that Grandma Richie loved to listen to.
Richie Blackmore (Ritchie Blackmore) – was born in the English province on April 14, 1945. Already in his youth, he demonstrated a virtuoso possession of a guitar, which caused the desire of many beginning groups in England to have such a solo guitarist in his group. Jon Lord (Jon Lord) – was born in England (Leicester) on June 9, 1941 and from childhood began to play the piano, and later began to take lessons in playing this instrument. Ian Paice was born on June 29, 1948. In adolescence, he showed a love for percussion instruments and, at the age of 14-15, received his first drum set. Rod Evans (Rod Evans) – born January 20, 1947. The first vocalist of “Deep Purple”, was distinguished by a “ballad” voice, because of which he was expelled from the group in 1969. Nick Simper – born November 3, 1945.
The group immediately began to rehearse and practice the material a lot, and already on April 20, 1968, the first Deep Purple concert was held in Denmark. The group followed its own style – rock with a fair amount of classical music.
The musicians also showed themselves as good arrangers, starting to work out cover versions of songs by various artists. The first album released in September 1968 – “Shades Of Deep Purple” – contained four cover versions, among which the song “Hush” achieved great popularity, hitting the 4th place in the American hit parade, and for which in the USA musicians got their The first “golden disc”. Continuing in the same vein, the band releases 2 more albums, which, like the first, do not achieve absolutely no popularity in England, but have little success in the USA. This is the album “Book Of Taliesyn”, released in late 1968 and the album “Deep Purple”, which appeared on American shelves in June 1969.
Then the following happens, Blackmore and Lord, decided to enter the English music market and move in a “hard direction”, i.e. the musicians decided to change the “sound” of the band and play hard rock. But Rod Evans and Nick Simper were not suitable for this. It was decided to find a new vocalist and bass player. By that time, Deep Purple had released 3 albums and a rather impressive number of singles, and if they had broken up then they might have been remembered by rock experts and encyclopedists as one of the most prolific cover bands in England.
Rodva Evans was replaced by a talented vocalist with an extremely powerful high voice. His name was Ian Gillan. Roger Glover was invited to the place of Nick Simper. Both new musicians came from the group “Episode Six”. With the appearance of Gillan and Glover in the band, Deep Purple began to play really cool. With this, the group began climbing the ladder of success.
Ian Gillan was born in England on August 19, 1945. In his youth he became interested in gaining strength, rock and roll. In 1964 he joined the group “Episode Six”, where he spoke until July 1969.
Roger Glover (Roger Glover) – born November 30, 1945. In 1964 he joined the group “Episode Six”, where he became friends with Jan Gillan. In 1969, he accepted an offer from a promising but little-known group “Deep Purple” to join it with Gillan.
With the new line-up, the group released the single “Hallejujah / April. Part 1”, which passed unnoticed at that time, and is now the classic “Deep Purple”. In September, the group gives a concert along with symphony concerts. The concert was published on the record “Concerto For Group And Orchestra” and also appeared on video. A rather unexpected job for a group that decided to move in a “difficult direction”. But the album was noticed in England (!!!) and it hit the 26th place in the charts.
Meanwhile, the band is working on a new material that was supposed to appear on their new album. And they worked on the album “Deep Purple In Rock”. On a new album released in June 1970, “Deep Purple” appeared as a completely new group. The musicians played real hard rock, composed by them themselves, where guitar and organ literally compete with each other. All this was supported by an incredibly powerful rhythm section and Gillan’s divine vocals (divine – in the literal and figurative sense – in the same 70th year, Gillan became famous for having played the part of Jesus Christ in the rock opera “Jesus Christ Superstar”) . “Deep Purple” made a splash. Although the album “Deep Purple In Rock” and did not hit the first place, and took 4th in the charts in England, his mark in the history of rock music is simply huge.
Having finally secured the success with the single “Black Night”, which was released immediately after the album “Deep Purple In Rock”, the musicians began a continuous tour, only occasionally interrupting to record the next albums. Recorded on such an extremely heavy touring schedule, the albums “Fireball” and “Machine Head”