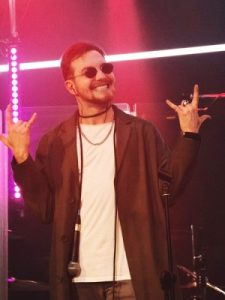 With the second “Agenda” it turned out more prosaic than with the first. Pure mathematical calculation: 9 tracks, 3 good, 3 excellent and 3 bad. Let’s figure out who is who.
A LITTLE ENTRY: For what (besides music) you really can respect and love Lokimin, so much for how sincere and open he is to his audience. Without false hypocrisy and pathos, he managed to create a unique biosystem within his STAI, bringing the listener-musician relationship to almost perfect condition in the era of social networks with the help of his Twitter. Despite the fact that Roma has not so many subscribers, compared to many stars of the genre of our days, their howls are louder than 30 thousand reposts and news about broken reposts, because they are devoted to their idol .. no, not an idol, but a friend, a real fellow like real dogs and willing to drown for his success free of charge, display the hashtag # Hang in social networks tops, distribute his tracks to all corners of the Internet, forcing all her friends to listen to the “Queen” and create such hype in the media field, what about the long-awaited exit the very same “poves2ki »Absolutely all Internet users will find out. The only thing that really confuses the listener and the artist in this communication is when Lokimin begins to explain the meaning of his lines, respond to messages of the disgruntled about why something is said clumsily, and here it is wrong, and tell which idea he put into this or that yes, perhaps many will not understand another song, perhaps no one will understand at all, but there are two nuances: firstly, if no one has guessed, then the idea is poorly presented, secondly, music (even rap) is still art and its beauty lies in the fact that a man is free track acce certain job creator and draw conclusions from them as he pleased with his inner world and imagination. And now let’s move on to the review itself.
So far, Loki is in search of “his” sound, although he has a decent foundation of two albums and one EP. The release of “Poves2ki” was accompanied by a really interesting mini-quest in real life: Roma recorded all 9 tracks on tape (!) And hid them in different parts of Moscow. The peculiar Easter eggs were collected in just a couple of hours – this again indicates that Loki has a fan base, she expands and actively communicates with her idol. The main thing is not to make from your “Stai” zombie followers who will eat everything that a musician will give them. But it seems that Lokimin has complete order with this – the rapper is soberly aware of how to educate and develop his fans. So what’s the new material from Sibiryak?
Speaking of old stuff: the first clip of Roma “On Fox”, shot with money from crowdfunding, recently scored half a million views.
The main difference between the new “Agenda” and the old one is that Loki has noticeably moved away from the vector set in the last part to mix rap with hard rock, which seemed fundamental to the new round of Roma’s work. No, the new tracks are still powerful and not adapted for the soft ears of lovers of the newfangled sweet house rap, but, unfortunately, this time, the whole rock mood of the tracks and almost punk energy disappeared. On the one hand, this is good – Roma continues to prove to everyone that he is musically comprehensively developed and does not drive himself into some kind of framework, on the other – we will probably lie to ourselves if we say that we did not expect the logical development of such an interesting sound from the First EP . With the second “Agenda” it turned out more prosaic. Pure mathematical calculation: 9 tracks, 3 good, 3 excellent and 3 bad. Let’s understand who is who and let’s start with the minuses.
The first hit past the goal is the track “Tongue”. There is not much interesting in it, that in music (the dullest sample), that in the text (on the topic of a bad life in small towns, Loki spoke much better in other songs). From time to time “Tongue” can be listened to, but for the most part this particular track you will skip more often. This is a completely filler composition, which is a bit confusing, because the EP should be concentrated squeeze without “water”. It is even more surprising that Loki practically did not resort to the use of fill-tracks before “Poves2ki”.
And it was here that Roma for the first time went too far. “Sick of me” is a rather complicated musical and poetic composition, where the presentation and leitmotif change as much as 3 times per timing: the theme was raised correctly, the idea was, but it was all poorly implemented. Loki failed to withstand exactly all three desks: the track begins intriguingly, the second part is excellent, and the third one is stuck somewhere between “medium” and “bad”. Confusion and a hodgepodge – these words want to characterize “Sick me.” “Run away” hook If, textually and emotionally, in principle still fits within the framework of the track concept, then it’s absolutely musical failing to listen to the cutting ear vocal misunderstanding “ubeha ubeha ubeha, ubeha ubeha ubeha” without scream, without hoarse tears (which would fit in here like poured ) simply difficult.