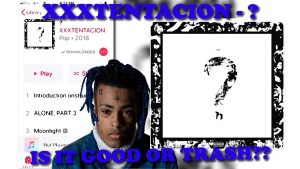 Tentacion has big ambitions and tries to create an important look around his albums, exposing the music to be thoughtful, extremely emotional and, most importantly, honest. You listen to the album, but it is very difficult to catch this very emotional state, because there is no solid vibe here – everything is cut into small pieces, which is why its mood resembles a timelapse of a raging ocean.
The main problem of the debut album XXXtentacion is considered to be its short duration and a meager set of words with the help of which the artist tries to establish contact with his listener. It’s generally amazing how the musician managed to get into the top five of the charts, releasing only 20 minutes of music in the era of streaming, when the minutes of listening music are generally considered, but this also ceases to be a shocking fact when you find out what support the performer enjoys from his listeners.
More than half a year passed after the masses learned about Ax’s unacceptable relationship with his girlfriend – then the court proceedings dragged on, the matter was complicated by the fact that Geneva decided to refute his own testimony, and everyone who actively monitors the rapper’s life was aware that the likelihood of his prison The conclusion is high like never before.
Realizing that there is no way back, XXXtentacion decided to begin to change by all means, and in a sense, the person who released “17” and the one who wrote “?” Are different people. Tentacion began to actively communicate with the audience, telling them about life, sharing different stories and experiences: once he told about his friend who had committed suicide, and this greatly touched every fan of the artist – because it was sincere.
The first vlog of the rapper, in which he spoke about his life and life, collected almost 3 million views per month.
The musician took up charity work, started his own video blog and tried to be quieter than grass, because any conflict situation in his case could be a decisive argument in court. Together with the artist, the sound filling of his creations has changed – his new album is positioned as a kind of portfolio, a universal set of tracks that you can listen to everywhere and feel comfortable, but if you think about it: what Ex says should cause discomfort, which is why his name symbolizes the unknown.
Like the previous project, “?” Begins with instructions, according to which we must be completely imbued with the genius and mind of a musician, feel his energy and madness. He claims that his new brainchild is “alternative music”, but really “alternative” is at least here, because in most cases X uses quite trivial techniques on his tracks, while listening to them, the thought “I’m somewhere heard “- for example, the best number from the whole album” NUMB “sounds like a fairly typical pop rock hit from zero,” Infinity (888) “could easily get on one of the early mixtapes Joey Badass, and” going down “is very strongly resembles the work of Trippi Redd. This in no way means that these songs are bad, just the information in the opening hermitage does not correspond to reality. Of course, sometimes Tentacion tries to do something unusual, an example (not very successful) can serve as “Pain = BESTFRIEND”, in the recording of which Travis Barker from blink-182 helped the artist: in the chorus Jusei begins to inorganically apply extreme-vocal under a very quiet acoustic instrumental that causes some bewilderment.
Another problem of the album is the timing of the tracks. Yes, in the context of the music of artists from the soundcloud, first of all trying to convey the atmosphere of a certain decay, it seems quite natural, but Ex himself declares that he wants to tell the world his story, share the spiritual pains that torment him with his mind, and they did not repeat his mistakes. For two minutes to tell some intelligible story and make morality out of it is simply impossible, especially when half of the song consists of repeated words and choruses for two or three words. Everything else, Jasey never learned to sing: he mumbles, whispers, mutters, because it’s so much easier to hit the notes, because he simply does not know how differently.
In general, “?” Is a sufficiently high-quality kaleidoscope of genres and compositions for every taste: there is a hardcore hip-hop, old school, alternative rock, favorite acoustics, Latin American pop, and, of course, r & b. Among the 18 numbers in the tracklist, only two last a little more than 3 minutes – everything else reminds unfinished demos by construction, but if you recall, then the same Kanye on “The Life Of Pablo” had some short compositions and served as peculiar fillers.
In their video blogs, Tentacion very actively teasered the song “SAD!”, Which gained appetite for the listeners and ensured the track had real success in the charts – the song without the video had already reached 7 of the most prestigious Billboard Hot 100 chart.