Hits are born at home 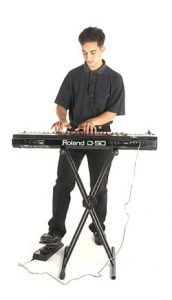 The problem of learning is one of the most important, but, unfortunately, the least lit, which often leads to deplorable results in terms of creative growth: without setting the proper basis at the very beginning, it will not be easy to get on the right track. The first thing you need to decide is how seriously do you plan to master musical science. If the case is limited to the execution of simple melodies, then, in fact, any device will do – regardless of the type of mechanics and the number of octaves. But if your intentions are more solid, then this is completely different. In such a situation, an instrument with 88 keys (7 octaves) of “heavy” hammer mechanics is necessary, which, as far as tactile sensations are concerned, is as close as possible to a real piano one. The question of choosing a digital piano also requires a responsible approach, especially given the fact that a model with a high-quality keyboard and realistic sound is, alas, not cheap. Yes, but why not just get a regular piano? – take an interest you. Ideally, this should be done, only because it takes up a lot of space, needs periodic prophylaxis and does not allow sound output through headphones. Not to mention the one and only “built-in timbre.”
Keyboard Types
In most modern electronic instruments, keyboard mechanics are divided into three types: unweighted, semi-weighted, and full weighted. Unweighted, it is also called synthesizer, can be found in the most inexpensive models with auto accompaniment. Such keys are pressed with little or no effort, and do not allow you to saturate the game with nuances and shades. Semi-weighted keyboards are the most common. They have a pleasant elasticity and make the performance more natural. The hierarchical pyramid is crowned with a full-weighted mechanics with a hammer effect, which is placed either in digital pianos or in high-class workstations.
Polyphony
This parameter indicates the number of sounds (notes) that the instrument can play simultaneously, including those extended by the sustain pedal. 64-note polyphony is the optimum for a digital piano, and 128 notes for a good workstation. This will allow even complex works to be performed without fear that the sounds will be “swallowed” due to the lack of hardware resources of the instrument.
Synthesizer structure
The principle of operation of an electronic keyboard instrument is shown in the diagram. In turn, the type of apparatus (digital piano, synthesizer with auto accompaniment, workstation, etc.) determines which fragments of this mosaic will be present and which will not.
1. Keyboard
The keys, stylized as usual piano ones, are equipped with sensors that transmit to the instrument’s electronics short digital block messages with information about the speed (force), the time of pressing and releasing each of the keys, as well as other parameters. The standard is called MIDI (Musical Instruments Digital Interface) and has been used in all digital synthesizers for more than a dozen years.
2. Tone generator
It is appropriate to compare it with colors that can animate a children’s coloring book, and MIDI messages with the outlines of the picture. The tone generator contains in its memory a variety of presets (timbres) that mimic both live instruments and “electronic” sounds. It is enough for the user to specify which timbre from the presented range should be heard from the keyboard or sequencer MIDI commands. Thanks to this scheme, a musician, playing on the same device, can be a “guitar player”, a “violinist”, and a “drummer”. And since the MIDI interface allows parallel transmission of multiple data streams (MIDI channels), the tone generator can simultaneously sound different parts with different timbres.
3. Sequencer
Module for recording, editing and playing MIDI commands. With it, you can alone create a complex composition, with 100% control over the performance of any party. Beg another figurative comparison. Imagine that you wrote a text on a computer, and then without haste, edit it and correct spelling. The sequencer allows you to do the same with MIDI messages only. At the disposal of the composer is up to 16 MIDI-tracks, each of which captures the part of any instrument – a sort of ensemble of 16 subordinate “performers”. The process of recording a track is usually done in real time by playing the keys. In case of an error, it is possible to rewrite the desired fragment or cycle. Professional-grade sequencers allow editing the score up to the parameters of each individual note.
4. Effects processor
This module no longer works with MIDI commands, but with an audio signal — a sound that is recreated by the tone generator. Effects (echo, imitation of acoustics of halls, etc.) can be applied both to the whole work and to individual instruments.
5. Sampler
The device “capture” sounds from the outside (through a microphone or as a digital file from other sources) and play them at the user’s command.